I have to drive 20 miles to see a traffic light. To get to an airport from our farm requires a 2-hour drive to Burlington.

In other words, life on our dairy farm in Vermont can feel pretty remote.

That was especially true before we gained access to broadband, back when it seemed like we faced a red light at the on-ramp to the information superhighway. Now that broadband finally has come to our country home — the red light has turned green — my family can enjoy the benefits of rural living along with the connectivity that keeps us in touch with the whole world.

We’re better farmers, too, because high-speed internet improves our ability to raise our dairy cows — and as we continue to take advantage of the communications revolution, we’re going to keep on perfecting our operations.

Sadly, 24 million Americans still lack access to broadband, according to a report issued last year by the Federal Communications Commission (FCC). The vast majority of them live in rural areas, and many are farmers. Two years ago, a U.S. Department of Agriculture (USDA) survey found that 29% of farmers did not have reliable access to the internet.

City dwellers and suburbanites may take broadband service for granted. Here in rural America, we can’t.

This isn’t a problem just for farmers, however. It’s a problem for all of us because it means that our economy falls short of its potential. A USDA report earlier this year showed that if every farmer could make the most of digital technologies through rural broadband, our economy would grow by as much as $23 billion per year.

So rural broadband is a win-win-win: more income for farmers, more tax revenue for the government and more affordable food for everyone.

Secretary of Agriculture Sonny Perdue puts it this way, “Broadband in rural America will be as transformative in the 21st century as rural electrification was in the last century.” 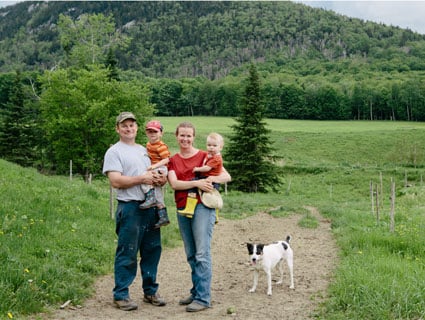 That’s a striking claim, and it may be close to the mark. Broadband certainly has changed the way we run our farm.

Before broadband, we relied on the slow and unreliable service of satellite internet. One of its peculiarities was that we couldn’t connect to it from our house, but we could from our barn. So, we built a makeshift office. This was less than ideal. I had to wear headphones to protect my ears from the loud noise of our vacuum pump. During rainfall, I couldn’t work at all because the service went down. And the rates of transmission were the digital equivalent of watching grass grow. When I wanted to download data, I’d leave the computer and come back later, hoping the job would be done.

Broadband made everything better. We keep excellent records of our herd, monitoring every animal’s health and production. The veterinarian doesn’t need to visit nearly as often because we can get our pregnancy test reports in our email from a milk testing lab in Pennsylvania. We can look up our milk production and quality measures from our dairy cooperative online, as well as receive text alerts if a report is ready. We also have instant access to our bank, allowing us to check balances, pay bills and request disbursements at any time of the day or night.

We’re hoping to make more advances soon. We’d like to put activity monitors on our cows so that we can track their movement and diet. If they get lost, we’ll find them. If they stop eating, we’ll know something is wrong. We’ll also put sensors on our sap tanks and in our sugar woods (where we produce maple syrup). If a line breaks or kinks, we’ll receive alert messages on our phones.

Perhaps these innovations sound mundane rather than gee-whiz miracles from the frontiers of modern technology. But that’s the point. They are the ordinary tools of business nowadays — and millions of farmers can’t use them because they don’t have broadband.

The good news is that the USDA is trying to solve this problem by investing in rural broadband. In June, Senators Susan Collins of Maine and Doug Jones of Alabama proposed additional funding. Around the same time, FCC chairman Ajit Pai announced the creation of a Task Force for Reviewing the Connectivity and Technology Needs of Precision Agriculture in the United States.

The task force’s title is quite a mouthful, but its mission is simple: Bring broadband to rural America.

We need it everywhere as soon as possible.

Joanna Lidback and her husband operate the Farm at Wheeler Mountain, a diversified dairy farm in Vermont. Joanna volunteers as a board member for the Global Farmer Network. www.globalfarmernetwork.org.

Ruminant dietary intervention is one of the most investigated categories in methane mitigation and is a critical area of innovation to build a sustainable food system.