Consumers now have an affordable option in time for the holidays 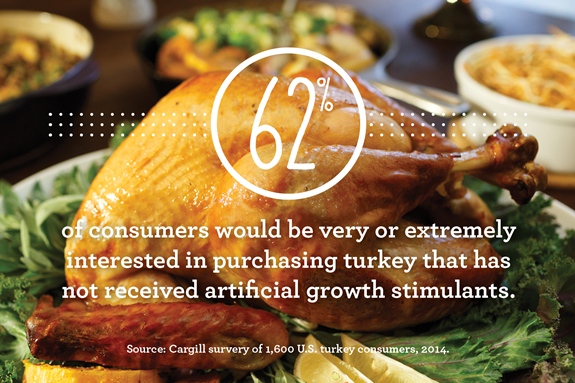 WICHITA, Kan. — Just in time for Thanksgiving, Shady Brook Farms® and Honeysuckle White® are now offering fresh, whole turkeys and fresh, bone-in turkey breasts raised without growth-promoting antibiotics. By working with more than 700 independent farmers to raise the turkeys, Shady Brook Farms and Honeysuckle White are the first major turkey brands to implement a change like this on a large scale. What’s more, these premium birds are available without the premium price tag.

“Consumers today are becoming more interested in what goes into raising their food before it reaches their plate,” says Jan Hood, marketing leader for Shady Brook Farms and Honeysuckle White turkey. “We’ve been listening to what they are looking for in turkey — or more importantly, what they aren’t looking for — and have chosen to remove growth-promoting antibiotics from our turkey flocks because consumers want it and we believe it’s the right thing to do for the turkeys in our care.”

A 2014 survey of turkey consumers revealed that 62 percent of consumers are interested in purchasing turkeys for Thanksgiving raised without artificial growth stimulants and half of consumers are looking for turkeys raised on independent farms.

Consumers who want to purchase organic turkeys this fall are likely to pay nearly 143 percent more than they would for conventionally raised turkeys. Shady Brook Farms and Honeysuckle White don’t think consumers need to sacrifice on price to have a wholesome turkey.

“We believe that good food should be accessible to everyone. That’s why we are making our fresh turkeys raised without growth-promoting antibiotics at a price comparable to conventionally-raised turkeys,” Hood said.

This major change has been in the works for more than a year, and in July of 2014, the two brands officially announced they were removing growth-promoting antibiotics from turkey flocks. Fresh whole birds and fresh bone-in breasts are now available for families to enjoy this holiday season and will extend to additional items in 2015.