A growing sense of Pride: Cargill’s Pride Network is still breaking barriers at 25

It all started 25 years ago with a memo.

That memo led, in 2000, to the birth of the Rainbow Alliance Employee Council, now known as the Cargill Pride Network (CPN).

Today, the rainbow flag flies high at Cargill facilities around the world. Pride Month in June is celebrated across the company. And as it celebrates its 25th birthday, the Pride Network is an important part of Cargill’s diversity, equity and inclusion efforts.

The Cargill Pride Network is celebrating 25 years at Cargill.

“The Cargill Pride Network exists to foster an equitable, safe and supportive business environment for lesbian, gay, bisexual, transgender, queer and allied employees,” says David Zwak, co-chair of the network. “By embracing our employees’ uniqueness, we create an environment where all employees can thrive.”

What started as a safe space for people in the LGBTQ+ community to meet has grown exponentially over the past quarter-century.

The Pride Network now has over 1,500 members around the world. In Brazil, the group has advocated for transgender access to employment and education, resulting in CPN representation at every operations facility in the country.

On top of that, Cargill received a perfect score in the latest Corporate Equality Index, a report published by the Human Rights Campaign Foundation to rate the treatment of LGBTQ+ employees in the U.S. That’s Cargill’s 19th perfect score in a row, highlighting the company’s commitment to putting people first. 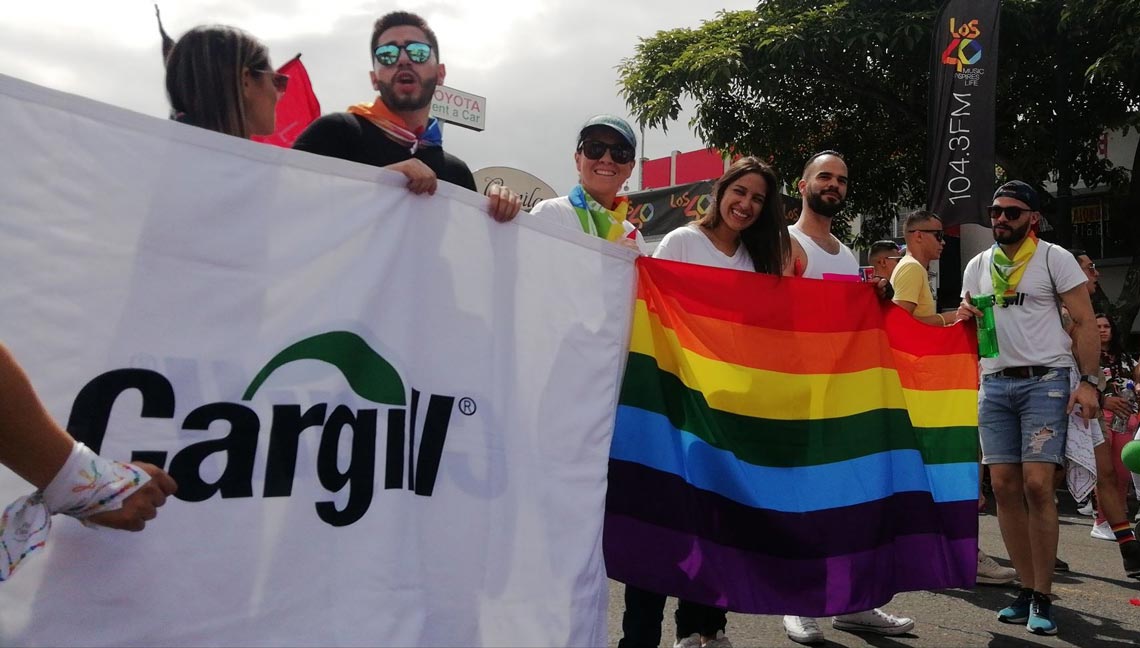 At Cargill, Pride month in June is celebrated across the company.

As the Pride Network has grown, so have the group’s goals and challenges. Today, CPN is working hard to empower allies to engage with the LGBTQ+ community.

David Webster, Cargill’s chief risk officer and leader of the Food Ingredients and Bioindustrial enterprise, is one such ally. The executive sponsor of the Pride Network says his journey to allyship and advocacy is rooted in his family history — but adds that’s not a prerequisite to supporting the cause.

“I have witnessed bias and mistreatment in action,” he says. “It helped me realize the leader I wanted to become and the environment I wanted to create. Everyone deserves to be themselves, and we must have an environment that allows all to thrive.” “By embracing our employees’ uniqueness, we create an environment where all employees can thrive,” says one Cargill Pride Network leader.

A brief history of Pride at Cargill

Three employees — James Quenzer, Dan Larson and Kevin Horne — send a memo to Nancy Siska, head of HR, about the formation of a gay employee resource group at Cargill.

Cargill becomes the first Minnesota company to receive a 100% score on the Human Rights Campaign’s Corporate Equality Index. Cargill has received a 100% score every year since.

Cargill participates in a Pride march in Bangalore, India, for the first time. Cargill Brazil signs on to the 10 commitments of the Businesses and LBGTI+ Rights Forum and is now part of an exchange network for good practices and connections with other companies in the country. Bust myths, master pronouns and be the ally our transgender colleagues need

Theo Ray-Huntington has come out twice at work — once when they started working for Cargill, and again more recently when they came out as transmasculine nonbinary.

‘Cargill has my back:’ As we celebrate LGBTQ+ Pride, three employees tell their stories

When Sharon Fallas joined Cargill three years ago, she immediately noticed it was different.