Cargill's salt works in the San Francisco Bay Area is an ideal area for salt making, thanks to clay soils and a Mediterranean climate – just enough rain in fall, winter and spring, followed by dry summers with steady breezes and summer sunshine.

Using natural power from the sun and wind, Cargill’s 12,000+ acres of salt ponds are capable of crystallizing 500,000 tons of sea salt each year. 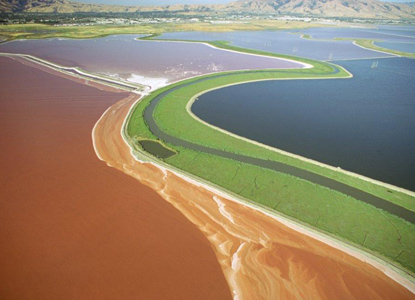 The pumpkin color of this salt pond comes from the salt-saturated brines and contrasts with the chartreuse of a nearby marsh and the blue unsaturated brines in a nearby concentrator pond. San Francisco Bay Salt Newark, California. United States

How Salt is Made

Flying over the bay or driving over some of the area’s bridges, you will notice salt evaporation ponds with distinctive colors: beautiful green and red hues, colored by the micro-organisms that thrive at varying salinity levels. As the sun and wind evaporate water from the brines, they get saltier. The saltiest brines are moved to crystallizers within our industrial plant sites.

Much of Cargill’s South San Francisco Bay footprint is devoted to salt evaporation ponds. Micro-organisms lend the ponds their bright colors ranging from blue-green to deep magenta, depending on the salinity and season.

Evaporation ponds also provide habitat for more than 70 species of birds. Because the ponds are shallow – an average of 1.5 feet deep – it's easy for shorebirds and waterfowl to find a meal in the ponds.

After the salt brines reach full saturation, they are pumped into crystallizer beds at Cargill’s harvest sites. Crystallizers are precipitation beds, usually rectangular in shape and surrounded by wooden bulwarks. They are engineered beds that have been rolled, graded, sloped and compacted for the smooth precipitation and mechanical harvesting of salt. This is where Cargill begins the harvests of the salts – up to 500,000 tons each year.

Cargill is committed to preserving the San Francisco Bay for future generations. We’ve worked collaboratively with local stakeholders for years to protect and improve the Bay Area.

In the past 40 years, Cargill has conveyed more than 40,000 acres of salt ponds to public wildlife agencies – at an estimated value of $150 million. These donations include: Cargill is a well-known benefactor of nonprofit, environmental, educational and civic organizations in Newark, Fremont, and the greater San Francisco Bay Area, where the company provides 200 union and management jobs and meets the needs of salt customers throughout the United States.

Whether participating in volunteer events at the refuge, collecting and sorting food for those in need, or coaching and tutoring kids, Cargill employees demonstrate their commitment to the community in which they live and work. In 1999, Cargill established a college scholarship program at Newark Memorial High School in memory of a beloved, long-time employee of the company, Claire Lopez.  Since then, nearly $85,000 has been awarded to dozens of deserving Newark students.

High priority will be given to students who will major in Science, Technology, Engineering or Mathematics.

Salt deposits form along edge of this orange-colored pond.

An overhead view of the mosaic of salt crystals.

As the deep magenta brine evaporates, it leaves behind a glistening white bed of salt crystals.

Clouds are reflected on the red “pickle,” or saltiest brine, that covers the Newark crystallizers, prior to harvest.

Questions? Reach out to us: