Substantiating the Safety of a New Sweetener

Strong consumer demand for a natural, low-calorie food and beverage sweetener has driven many companies to seek an ingredient to meet the demand. Cargill, in partnership with the Coca-Cola Company, identified rebiana, the best-tasting part of the stevia leaf, as a candidate that met all the criteria – natural, no-calorie and sweet. But a challenge remained: Rebiana was not approved for use as an ingredient in foods and beverages in the U.S. and certain other geographies. Many countries, believing stevia unsafe for consumption, had enacted regulations prohibiting its use as an ingredient in foods and beverages. Therefore, before Cargill could market rebiana as a sweetener, it needed to fully substantiate through scientific studies that rebiana was safe for human consumption in all foods.

Cargill developed a regulatory roadmap by identifying gaps between existing scientific evidence and regulations related to purified steviol glycosides, the stevia leaf’s sweet components. An understanding of the gaps helped to define a rigorous safety evaluation program to address

unresolved questions and verify the safety of rebiana for use as a general purpose sweetener. The research program, conducted over two years, included metabolism and pharmacokinetic studies, general and multi-generational safety studies, intake studies and human studies related to rebiana’s effect on blood pressure and blood sugar.

When the studies were complete, a scientific panel reviewed the results and declared unanimously that rebiana is GRAS, or generally recognized as safe, for general use as a sweetener in the U.S. Research findings were also published in the peer-reviewed scientific journal Food and Chemical Toxicology, establishing the safety of rebiana for use as a natural, zero-calorie sweetener in food and beverages. The scientific panel’s assessment and publication of study findings cleared the way for Cargill to introduce rebiana, branded as Truvia™ natural sweetener to companies and consumers long in search of a natural way to reduce calories while still enjoying sweet-tasting foods and beverages. 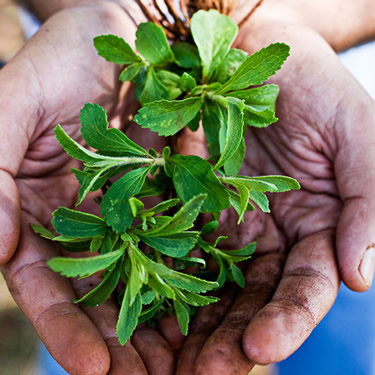 As a longtime trusted advisor for sweetener expertise, Cargill is dedicated to collaborating with customers to create unique solutions by aligning our people and resources with your needs.