“We all want the same thing – healthy food and protected natural resources.”  - Anne Meis from Nebraska 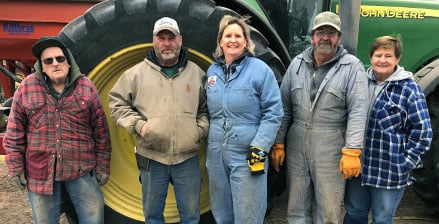 Anne grew up on a family farm and now runs a fourth-generation farm in Elgin, Nebraska, with her husband, brother-in-law and sister-in-law, farming corn, soybeans and alfalfa hay, and raising beef cattle.

Anne believes farmers have been stewards of the land from the beginning of time. But they’re also under pressure ‒ from the weather, ever more complex guidelines from government and environmental bodies, plus the underlying concern to stay viable and profitable. “Everything we do is about producing good quality food,” explains Anne, “and ensuring our son and his children can do the same.”

Instead of sweeping changes in agriculture, Anne favors a careful approach, tailored to each farm’s landscape and needs.

On her farm, the beef and grain sides of the business work in harmony through livestock integration. The cattle go out and clean up the corn stalks and fertilize the land.

They started no-till farming 20 years ago, taking cues from nature. Crop rotations between corn and soybeans add nutrients to the soil that the other crop needs, while alfalfa hay boosts nitrogen.

A regenerative approach can dovetail with profitability. Anne and her family save on fuel thanks to no-till. They also use less fertilizer, thanks to precise GPS imaging and soil sampling to pinpoint nutrient needs. A more exacting, efficient sprinkler system has reduced their water use significantly.

Sometimes the path isn’t clear. In Anne’s case, cover crops are a challenge with the short growing season in northern Nebraska. She believes financial incentives can help farms like hers make the switch.